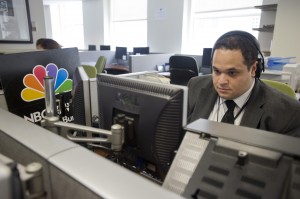 Nicholas Martinez at his summer internship with NBC News in 2009.

Nicholas C. Martinez is a freelance journalist and Masters of Arts graduate of the CUNY Graduate School of Journalism. Majoring in arts and culture reporting, Nicholas favors video and online presentations above other reporting mediums.

Martinez is also a freelance screenwriter, having his scripts reach the fabled William Morris Agency for sale. He is also a budding photo-journalist and audio storyteller, covering a variety of subjects from United States Senate races to comic book conventions.

He has worked with the New York Times on their new venture The Local and with NBC News as a News Production Associate during the Summer of 2009. Also, he had the chance to spearhead the 2011 adidas Grand Prix’s social media outreach while working with the American Red Cross as a video editor and archivist.

Currently, he is working with the New York Department of Education as a multimedia consultant on an amazing journalistic endeavor still in its infant stages. Keep checking back here for more details on this upcoming project when they are released.

In his spare time, he enjoys writing about and playing video games, reading comic books, playing the guitar and watching the greatest baseball team of all time – – New York Yankees – – kill the hated Boston Red Sox season in and season out.

If you are interested in hiring Nicholas to consult on your next multimedia, social media or public relations project, or want to discuss any potential job offers, feel free to contact him via email at nicholascmartinez@gmail.com.