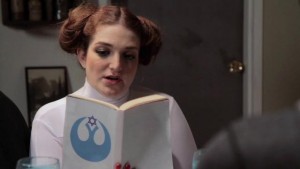 Comedian Jenny Jaffe’s childhood was anything but comical. During her high school years, she was diagnosed with a multitude of mental illnesses, which included her having extreme anxiety, OCD and suicidal thoughts. “It wasn’t something I talked to really anybody in my life about,” Jaffe, 24, tells Laughspin. “There was this long uphill battle. But, then the hill got less steep.”

After years of therapy and pursuing her love of comedy through performance and writing during her college years, Jaffe found a way to cope with her illnesses. She began performing stand-up in front of night club audiences. This eventually led to gigs writing for MTV, VH1 and xoJane and working for well-known parody powerhouses The Onion and College Humor.

Now, Jaffe is rallying her comedic comrades in arms to help tell troubled teens that they, too, can be okay just like her.

The New York-based comic started Project UROK (pronounced “you are okay”), a non-profit initiative that collects video testimonials and experiences of various contributors — including other comedians and famous comedic actors — who have, in the past, or currently struggle with similar mental illnesses. In the videos, they share the things that they wanted to hear during their youth — memorable, humorous and thoughtful advice with the goal to make teenagers feel at ease with themselves and their surroundings.

Check out Jaffe’s own confessional video below:

Now the non-profit plans to release video productions with more of a humorous twist, including a series of short sketches that use comedy to show teens how to cope with mental illness. Jaffe and her crew also plan to add more confessional videos; shoots are planned to occur on May 19, in which the comedians, actors and the general public is invited to participate. (Author’s note: If you are a comedian or in comedy, and are interested in telling your story, email Heidi Vanderlee for more details.)

“Comedy was what really saved me at my lowest point,” she said. “I got into comedy to give that same experience to someone else.”

Along with the video clips, Project UROK also offers resources for teens in distress, including links on their website to free emergency help lines, to non-profits that deal with specific disorders and to abuse assistance organizations like the National Domestic Hotline and Childhelp.

“Our goal is to create funny, meaningful videos for teenagers struggling with mental health issues, made by people who have been there before,” Project UROK’s website says. “In doing so, we will provide not only practical assistance, but also a sense of belonging, a sense of comfort and a sense of hope.”

Jaffe says she first asked comedians to contribute their experiences with mental illness but welcomes submissions from anyone who visits the site. “The comedy community as a whole is so supportive of this kind of thing,” she says. “I think it’s because most people can relate and because this message really resonates with them.”

Check out Mara Wilson’s testimonial. Wilson is a former child actor who starred in comedy hits Mrs. Doubtfire, Miracle on 34th Street, and Matlida and is now the host of the monthly live show What Are You Afraid Of?

Teen mental illness and depression is a serious issue, especially when it comes to preventing tragic outcomes. According to the National Alliance on Mental Health, four million children and adolescents in this country suffer from a serious mental disorder that causes significant functional impairments at home, at school and with peers. Also, more teenagers and young adults die from suicide than from cancer, heart disease, AIDS, birth defects, stroke, pneumonia, influenza and chronic lung disease combined. And over 90 percent of children and adolescents who commit suicide have a mental disorder.

“If someone is talking about suicide, you really should take it seriously,” says National Institute of Mental Health researcher Dr. Jane Pearson. “There maybe parents or providers that say, ‘Oh, somebody just wants to get some attention.’ They probably want to get attention for a reason. It’s probably worth following through. It might be that we don’t know for sure if someone intends to or not. Or the individual might not be certain either. But, we certainly want to give them some help.”

With Project UROK, Jaffe’s ultimate goal is to humanize those who battle with mental illness and to help teens who suffer much like she did many years ago.