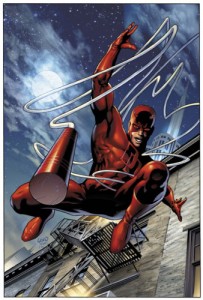 In the comics, Matt Murdock a.k.a. Daredevil is known as “The Man Without Fear.”

“Bless me, father for I have sinned.”

Never have those seven words had a greater meaning than in the world of New York lawyer Matt Murdock. Blinded as a child, Murdock soon discovers that his remaining senses are heightened to the point of superhuman accuracy. The transformation initially gives him pause; but as he grows, he learns to hone his senses and become a defender of justice both in and out of the courtroom.

Matt Murdock is Daredevil and in April, Netflix will debut his never-ending campaign to rid Hell’s Kitchen of the evil taking root once and for all.

For me, Daredevil embodies what a true anti-hero should be: Though he overcame a handicap to become a champion, he uses vigilantism and sheer violence to fight for those who can’t protect themselves — all the while skirting a flawed justice system in order to get results. It was Frank Miller’s run in the 1980’s that made Daredevil the anti-heroic incarnate he is known for today by creating and infusing now well-known characters like Bullseye, Elektra and the Kingpin into his core narrative. And it was writer/editor Denny O’Neil’s “Born Again” storyline (published after Miller left the title) that cemented Murdock as a Marvel staple by tackling what happens when someone you trust betrays you in order to feed their drug habit. Both writers’ work are what drew me to the character and what made me the fan that I am today.

All I can say is that April cannot come soon enough. My only consolation considering the long wait is that all the first season’s episodes will be released at once. Can you say Marvel Knight Marathon? I know I can.