Throughout history, mankind employed various forms of creative works as a means to examine and explore its existence.

Greek tragedies like The Iliad and Oedipus Rex inspect the pitfalls of the human condition, pieces of music like Haydn’s The Creation contemplate our possible supernatural origins and paintings like Van Gogh’s “At Eternity’s Gate” depict the exhilaration and heartbreak found within our fragile emotional make-up.

There are rare times, however, when a piece of art, music or literature transcends its original purpose of entertainment or recreation and morphs into a timeless catalyst for positive and constructive change.

Amazing Spider-Man #537, first published in 2007 during Marvel’s Civil War multi-title event, stands as a rally cry for anyone who believes in the political foundation used to build this great nation. Its pages serve as an examination and testament to the relevance of 18th century civic values in a modern-day geopolitical world. And as the 114th Congress began session today with its Republican majority in both the Senate and House, our nation is preparing for what many feel is the beginning of a long, ideological war for the future of the entire world.

Therefore, as they prepare to face the veto pen of President Obama in the last two years of his administration, it would be wise for these newly elected officials to listen to the advice of Captain America.

Marvel’s Civil War event marked a turbulent time for the heroes and villains of the Marvel universe, one which mimics our own current state. The storyline followed the United States government passing a Superhuman Registration Act, a polarizing law that required anyone with superhuman abilities to register their true identity to the authorities and undergo proper combat training with civil service authorities or the secret anti-terrorism group S.H.I.E.L.D. in order to prevent massive property damage and loss of civilian lives.

This piece of legislation split the superhero community down the middle: front and center heroes like Tony Stark (a.k.a. Iron Man) and “Mister Fantastic” Reed Richards supported the act and encouraged the public to do the same. But, others like Captain America and Luke Cage vehemently opposed the law, with Cage comparing the beholding of superheroes to government service to slavery. For more information on the overall storyline, click here.

The Superhuman Registration Act is reminiscent of the Affordable Care Act, a law which may be one of the many issues this newly christened Congress will address. Both in their scope were considered unconstitutional and damaging to the country’s democratic future, and both were polarizing to the point of dividing a nation at its core. Also, many pundits believe Republicans will attempt to pass the Keystone Pipeline Bill, despite President Obama threatening to veto it once he receives it.

Enter Steve Rogers, a.k.a. Captain America. During the peak the crisis, Rogers was confronted by a conflicted Spider-Man, who was weighed down by being labeled a national traitor after joining Captain America’s anti-registration movement. While standing on a rooftop in New York City, Parker asks Rogers: 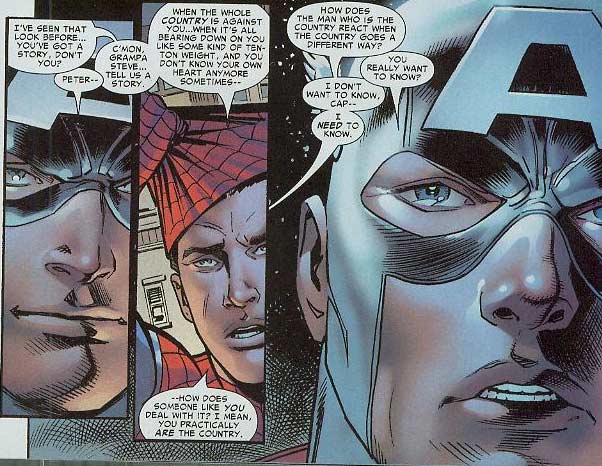 When the whole country is against you, when it is all bearing down on you like a ten-ton weight and you don’t know your own heart sometimes, how does someone like you deal with it? How does a man who practically is the country react when the country goes a different way?

Captain America responds with quite possibly one of the greatest inspirational speeches found in all fiction, let alone a graphic novel. Members of Congress, take note: 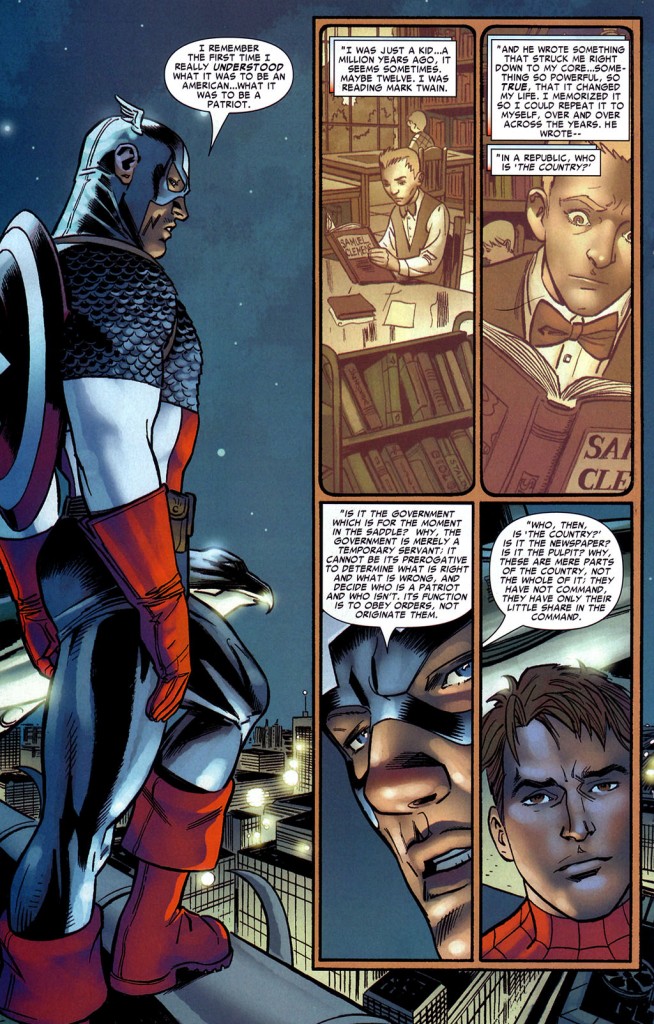 I remember the first time I really understood what it was to be an American…What it was to be a patriot. I was just a kid…A million years ago, it seems sometimes. Maybe twelve. I was reading Mark Twain. And he wrote something that struck me right down to my core…something so powerful, so true, that it changed my life. I memorized it so I could repeat it to myself, over and over across the years. He wrote: ‘In a republic, who is the country?

Is it the government which is for the moment in the saddle? Why, the government is merely a temporary servant: it cannot be its prerogative to determine what is right and what is wrong, and decide who is a patriot and who isn’t. It’s function is to obey orders, not originate them. Who, then is the country? Is it the newspaper? Is it the pulpit? Why, these are mere parts of the country, not the whole of it, they have not command, they have only their little share in the command.’ 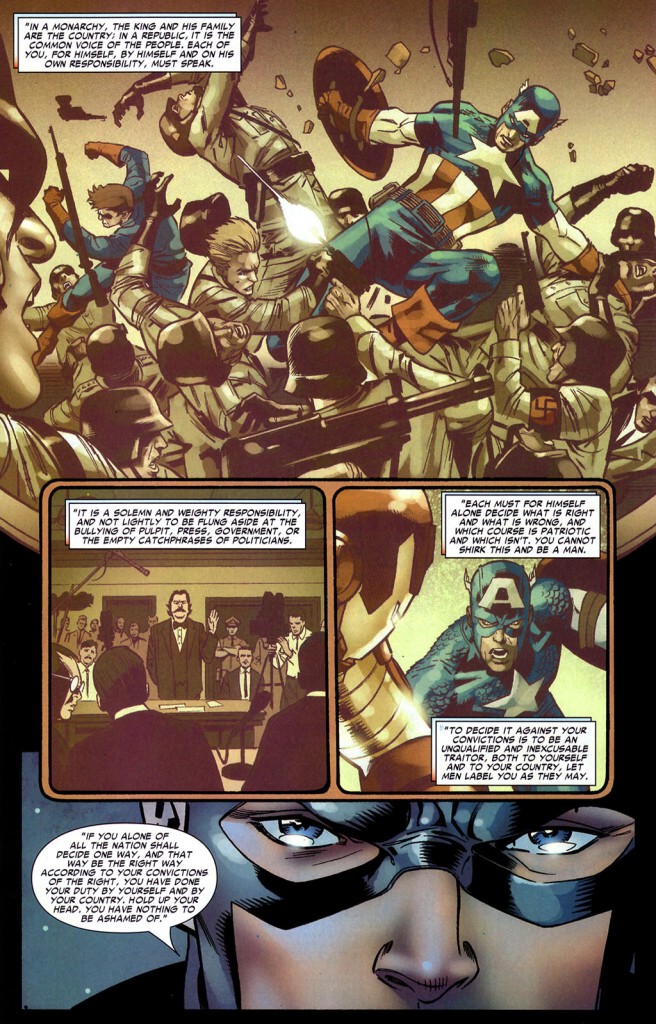 ‘In a monarchy, the king and his family are the country: In a republic it is the common voice of the people each of you, for himself, by himself and on his own responsibility, must speak. It is a solemn and weighty responsibility, and not lightly to be flung aside at the bullying of pulpit, press, government, or the empty catchphrases of politicians.

Each must for himself alone decide what is right and what is wrong, and which course is patriotic and which isn’t. You cannot shirk this and be a man. To decide it against your convictions is to be an unqualified and inexcusable traitor, both to yourself and to your country, let men label you as they may. If you alone of all the nation shall decide one way, and that way be the right way according to your convictions of the right, you have your duty by yourself and by your country. Hold up your head. You have nothing to be ashamed of.’ 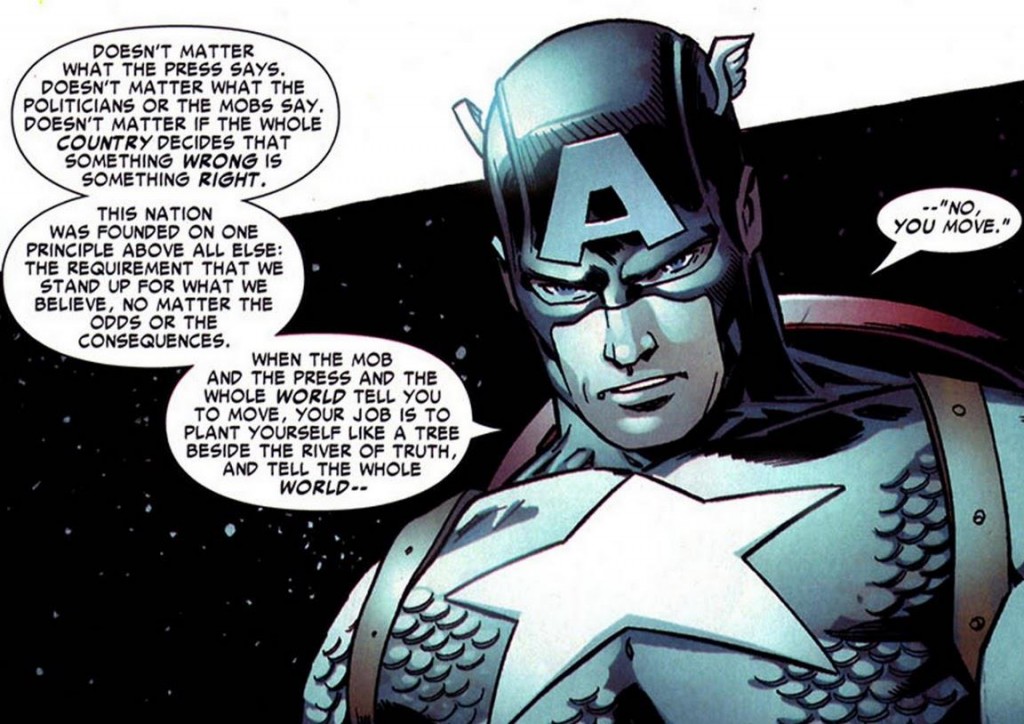 Right now, our nation treads on very turbulent ground. Criminals are viewed as heroes by the public and in the press, while true heroes of our nation are vilified for their weighty sacrifices and actions. Men who normally would be shunned as shake down artists by society dictate the political course of this country’s future. And wayward politicians remain ever vigilant in their unwavering desire to do what’s best for them and not their constituents.

What, then, is the truth Captain America is referring to? He wants Americans to stand up against injustices and create an environment where a true and lasting democracy can thrive.

Basically, we must resolve to always fight for truth, honor, justice and liberty — core values for which this nation was founded upon and Captain America forever stands for. Always remember his words, “It doesn’t matter if the whole country decides that something wrong is something right. This nation was founded on one principle above all else: the requirement that we stand up for what we believe, no matter the odds or the consequences.”

America must face the unknown future with both courage and conviction. Its people must put aside divisions and unite as a whole — as one nation under God — and not allow negative voices to deter our progress towards true freedom from oppression, bigotry and hate. There is no greater purpose, and eventually no greater reward, for mankind.

And our lawmakers must lead this campaign for true progressiveness right now — without the hindrance of distractions, the influence of denouncements or the obstruction of detours from those who have ulterior motives and agendas.

So, stand firm members of Congress. Stand firm in your belief of a balanced and resolute democracy. Stand firm in your disdain for Presidential Executive Orders that circumvent the constitutionally based law-making process. And for better or worse, win or lose, believe in the established Congressional system. If you are true to the principles of the America Steve Rogers believes in, the nation will follow you and mimic your example.

This is my attempt at planting myself beside the river of truth. Hopefully, the good captain’s words will inspire Congress to do the same, and ultimately help spawn a great forest on the streets of Washington D.C. — one filled with arboreal monuments to true social and political enlightenment.