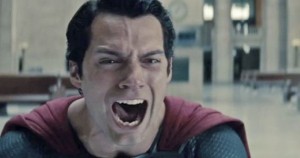 My reaction to the news that John Williams’ iconic theme would not be featured in “Man of Steel”.

With the buzz surrounding “Batman v Superman: Dawn of Justice”, many fans of the comic book movie genre have found time to take stock of DC’s plan to thwart Marvel’s world box office domination. “Man of Steel” marked Warner Brothers’ first attempt at creating a fleshed out movie universe and in itself, it takes two steps forward while also retreating three paces. While it finally employs the latest movie magic to accurately depict the super-powered abilities of the Last Son of Krypton, it also takes great liberties with the foundations found in Clark Kent’s origin story, especially during the times between his childhood in Smallville and his rise to super-heroic glory in Metropolis (i.e. his anonymous “do-gooding” across the globe that leaves a bread crumb trail for Lois Lane to easily follow).

In his latest op-ed for ComicBook.com, Dennis Upkins says that, while many are looking towards the franchise to re-invigorate DC’s mainstream movie appeal, there is an unnecessary viciousness when it comes critiques of “Man of Steel.” “They definitely illustrate a double standard at play when it comes to Man of Steel and Superman in general,” he said.

Points of note worth gleaning from the article:

1) The Superman of Man of Steel isn’t any less reckless than The Avengers in their destruction of a major metropolitan city.

2) Superman murders Zod in defense of innocent lives, while trained killers like Hawkeye and Black Widow have a lot of “red in their ledger” from killing those who may not have deserved it.

3) Superman is much less reckless than Tony Stark, who broadcasts his home address across the globe on television and challenges a terrorist to attack him.

All in all, Upkins makes some valid points in defense of the film, to the point where I am tempted to re-visit David Goyer and Zack Snyder’s vision of the Big Blue Boy Scout with a new appreciation for their creative efforts.

Check out the whole article here.

Also, in anticipation of Dawn of Justice, check out my take on Christopher Nolan’s and Warners’ last vision of Batman on the big screen in my op-ed “The Dark Knight Falls.”