In the midst of searching for gainful employment and taking on freelance assignments, I’ve been spending my time catching up on some of my favorite pastimes.

For example, I’ve put my Netflix account to good use by tearing through episodes of Archer, The West Wing and Doctor Who. I bought the entire Song of Fire and Ice series last year, which filled my summer reading quota (along with my fall and winter one as well.) I’ve made it a mission to update my website and make it vibrant (which is why you are reading this post at the moment.)

And of course, I’ve been my PS3 to good use.

But, there is something I need to admit as a gamer, a secret I’ve kept from family and friends (or at least the ones who don’t see my PSN trophy updates on Facebook) for almost 2 years now. It’s hard for me to admit this, but I’m going to just say it as plainly as possible.

My name is Nicholas Martinez and I am a digital superhero. (Click the video below to see Stewie’s reaction to this news.)

Since January 2011, I’ve been a part of a large and often enthusiastic community within the popular Playstation 3 MMORPG DC Universe Online. The game, based in the fictional universe of DC Comics, gives players the opportunity to create their own superhero or villain that can either save the world or profit from its destruction (Note: players are made through a in-game creation matrix that allows you to choose you character’s gender, moral affiliation, power, movement mode, clothing and looks.)

Heroes have the choice to be mentored by either Superman, Batman and Wonder Woman (naturally); villains can learn dastardly deeds from The Joker, Lex Luthor or Circe. In order to get stronger or “level up,” characters run missions in both Gotham City and Metropolis based around the main in-game storyline (in a nutshell, Brainiac has invaded Earth, and will stop at nothing to conquer its inhabitants and destroy the planet.) Most of the leveling-up missions are solo. However, once you reach Level 30, you are allowed to run instances geared for two players (called duos), 4-players (called alerts) and 8 players (called raids).

There are four in-game roles to choose from depending on what power you select at the beginning in the creation screen. Anyone can be a DPS (short for Damage Per Second, the heavy hitters in the game), but only certain powers match up to the game’s support roles of Healer, Controller (the battery that provides power to the group) and Tank (the punching bag of the group, so to say.)

Here’s an example of the gameplay, featuring the 4-man alert called “Inner Sanctum,” where players help Batman rid the Batcave of Brainiac and the robotic menace Brother Eye (Background music was added by the video uploader and is not in-game):

I have three heroes that I mainly use (one pure DPS, one Healer/DPS and one Controller) and a villain DPS that is just as strong as my heroes that I occasionally play with. But, for the sake of this post, I will only focus on my main toon (in-game lingo for your most powerful or your favorite character) who’s named, just like my Defiance Ark Hunter, after the late Sir Edward Woodward’s greatest television role. 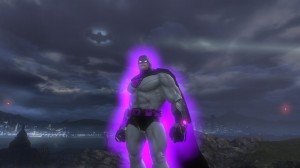 Gotham’s Favorite Son, The Equalizer, my Mental DPS from DCUO.

Meet The Equalizer, my pure DPS mentored by The Dark Knight himself. A resident of Gotham City, The Equalizer has a CR of 88 and his current power is Mental. (Note: CR = combat rating, one system used to determine the strength of a character based on the level gear they are wearing. The highest anyone can have at the moment is 90.) Mental powered toons use their extraordinary minds to get things done, possessing moves like Telekinesis, Terrorize and Menace in there arsenal of superpowers. They are also one of three powersets (Gadget players and Hard Light/Green Lantern characters beings the other two) that can also serve as effective controllers if they have the proper gear and stats.

E-Q, as many in my league affectionately call me, has 116 skill points and uses his fists via the Brawling weapon set to thwart criminals terrorizing the good citizens of Gotham. (Note: skills points are earned by doing specific feats of heroism or villainy in-game. They are the other determining factors to how strong a character is. Once you have a skill point, you can never lose it and they are used to boost innate stats in the game, like health, might and defense, and enhance your weapon trees. Also, there are many weapon sets in the game. Check out the full list here.)

Why am I sharing all of this information with you? After all, superheroes are supposed to keep their identity a secret right?

Well, if outing oneself worked for Tony Stark, then maybe it can work for me. I mean, look at the reception he received just 6 months after telling the world he was Iron Man. Dancing girls, people! DANCING GIRLS!

Seriously, my reason for sharing is simple: during my near two years playing this game, I’ve experienced some interesting, exhilarating and saddening experiences. In fact, many of the lessons I learned in-game are surprisingly enough ones that are being pondered by psychological and cognitive researchers around the world. Basically, there was a major sociological examination going on under my nose and I never realized it until now. And I am going to use future posts to bridge these episodes into thought-provoking discussions on social norms, politics and relationships.

For example, what factors lead a group of people to create a league/legion? (Note: League and legion are the in-game terms for a group of people who create a clan or fall under one banner and play together as heroes or villains respectively.) What determines how a league is formed? (In essence, this league becomes a created community, a place where people who wouldn’t usually meet under normal circumstances come together and bond over a common loves or interests both in and out of the game.)

How does one make sure everyone in said league/legion are happy with what the group chooses to do on a regular basis? (i.e needs versus wants, sacrificing of self-interests versus the needs of the group.) What happens when a person tries to sow discord in the group because he/she is not happy within the community? (i.e Self-want overrides communal needs and becomes a factor of discontent or a motivator of change depending on your point of view.) As a leader of a league (which I am) how do you keep order and make everyone happy (if that’s possible) without offending the members of your group? 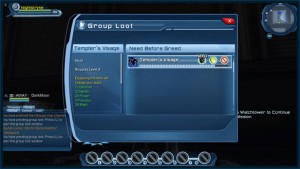 An example of a loot drop under the “Need before Greed” system.

What is the etiquette for rolling/passing on in-game loot? (Note: In order to determine which group member gets items that are rewarded for defeating a boss in a duo, alert or raid, players often use the “Need before greed” priority system. Any player who presses need on an item is assigned a random number based on a scale from 0 – 99 by the in-game computer. Whoever gets the highest number wins the prize. If you have the ability to need on a role-specific item but are not playing in that role during the raid, it is courtesy to allow the people playing that role to have first choice of the gear. They can of course say they don’t need it and allow others outside the role to vie for it. But most times, people need outside of their role, which is frowned upon by the community at large. Many ignore the etiquette and need on everything that they can because they can, without giving it a second thought. It is has been labeled as ninja looting for the stealthy and sneaky nature of the act. It’s a polarizing topic amongst the community that is constantly debated.)

How do you interact with people while using a pseudonym like my own? Do you remain the same or do you take the opportunity to become someone else in this fantasy world? (i.e. real self versus created self.)

Ultimately, I believe using this forum to discuss these topics with some sort of real world context for comparison is a worthwhile endeavor. Consider this a running sociological study into the minds of digital superheroes (and some villains) and I’m the Jane Goodall of DCUO. I don’t have all the answers but as a wise person once said, “It’s not the destination, but the journey that matters most.”

Hopefully, like Ms. Goodall, it won’t take me 45 years to get from Point A to B.