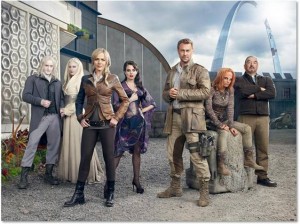 The cast of the TV show, who will also make cameos in the video game.

For those of you not aware, the SyFy Channel is preparing to launch an amazing initiative that features the most interactive programming ever produced on television.
Starting Monday, the network known for airing science fiction hits like Battlestar Galactica, Stargate SG1 and Warehouse 13 will debut the much anticipated post-First Contact Earth drama Defiance.

According to its About page, the show, produced by the creators of Galactica and Caprica, features the following dramatic backdrop:

In the year 2046, it’s a new Earth – with new rules. Over thirty years after various alien races arrived on Earth, the landscape is completely altered, terraformed nearly beyond recognition. To the town of Defiance, on what used to be St. Louis, comes the mysterious Nolan (Grant Bowler) and his charge, Irisa (Stephanie Leonidas). As they settle into town – overseen by the mayor, Amanda Rosewater (Julie Benz) and filled with residents like the powerful Rafe McCawley (Graham Greene), enterprising lounge owner Kenya (Mia Kirshner) and the ambitious, alien Tarrs (Tony Curran and Jaime Murray) – events begin to unfold that threaten the fragile peace this border town has fought for.

Sounds like a typical sci-fi outing. It is except for one small detail: Defiance is a video game too.

For the first time ever, the events of a television show will directly affect the storyline of a video game in real time. Characters from the show, like Josh Nolan and his adopted alien daughter Irisa, will appear in the game of the same name and you will get to work with or against them during the course of the MMORPG’s narrative evolution.

In the game of Defiance, players take on the role of Ark Hunters, specialists in survival, combat and tracking who brave dangerous frontiers to retrieve lost relics of advanced or alien origin in return for great financial rewards (The Arks are the ships that brought the aliens to Earth). Players can search for Arks on their own, simultaneously join tens of thousands of other players for missions or just explore the fully realized, future world of Defiance (it’s really, really big). Custom character creation allows players to adopt a human or alien appearance for their Ark Hunter.

I beta-tested the game (which was released on April 2nd for the PS3, XBox 360, and PC) and though it had its pre-launch jitters, it was a fun experience and looks to be a solid MMO effort from Trion Worlds. Currently, I am done with the main storyline in the game (my character is named in honor of the late Sir Edward Woodward’s best TV role) and I am having a great time catching up on side missions I passed along the way. It’s a vast world and I am enjoying my time exploring it.

And if you’re on the fence about the show, SyFy was nice enough to release the first 14 minutes of the pilot before Monday. They had me at Johnny and June’s Jackson. Defiance debuts on Syfy on Monday, April 15 at 9/8c.