Editor’s Note: While this article was written in May of 2009 for a CUNY J-School assignment, Reklaw’s site is still up and running today. Check out his website and the archive of all his comic strips here. I also added one of his recent creations, a picture of the reviewed comic entitled “President Stardust” and a video interview of Reklaw created by Portland’s Independent Publishing Resource Center in 2010.

A tree house cult leader implants a mongoose in a pregnant woman’s uterus, calling it “mother nature’s midwife.” An unemployed office worker enters a CEO’s office in response to a job opening and loses the position to a garden hose. After skipping it across a river, a physics-defying stone returns to its excited thrower and an unimpressed Albert Einstein.

These bizarre dreams encompass some of the tens of thousands of regular and electronic mail correspondences Jesse Reklaw has received over the last 14 years. Reklaw, a Portland-based cartoon artist, selects the best of the lot and transforms them into classic four-cell comic strips.

The comics then become a part of an online dream diary called Slow Wave – – an interactive examination of the peculiar, unique and surreal nature of the unconscious mind.

“I think dreams are well-suited to comics,” Reklaw said via email. “People write less self-consciously when they tell dreams. [And] dreams are easier to use as ‘raw material’ than a crafted short story or poem.”

The inspiration for Slow Wave originated from, ironically enough, a recollected dream. While studying computer science at the University of California Santa Cruz, Reklaw’s sister retold a recent dream to him. Reklaw took it and morphed it into a comic strip. He then asked his friends to give him stories to illustrate and used them as a way to improve his artistic technique.

“I think cartooning attracts a certain personality type that has artistic aspirations, but lacks the highbrow rejection of mass media,” Reklaw said. “It’s sort of a ‘middle-brow’ mindset that wants to distill popular culture.”

Reklaw’s editorial process is laborious. He receives around over 20 submissions a week, mostly from the Internet. He then rates the submissions on a scale of one to 50, based in large part on whether they make him laugh. Dreams with scores of 33 and higher usually make the cut. 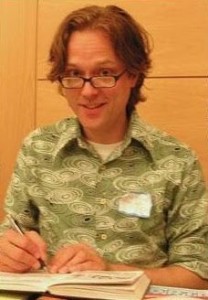 Reklaw autographing one of his comic collections. Photo from reglarwiglar.com

He then spends about 2 hours editing the final selections into a concise 150-word story. He takes about 6 hours drawing, inking and coloring the work. Then it is just a matter of preparing the finished product for print and web distribution.

Slow Wave abides by a few hard and fast rules – – Reklaw doesn’t use submissions where people change into other objects or characters midway through the dream. He also avoids dreams that have hybrid characters, like multiple combinations of different people or human and animal amalgams, unless the pairing is especially funny.

And Reklaw ignores submissions with explicit narrative content. “I don’t draw dreams with sexual imagery or graphic violence, because I like to aim for a wider audience,” he said. “Alternative weeklies usually have a pretty wide editorial policy, but I still try to censor my own strip.”

In 2007, Will Nicholes of Fort Wayne, Indiana dreamed that he campaigned for the office of President of the United States. He submitted the dream to Slow Wave and a few months later, Reklaw published it. The cartoon, entitled “Running for President,” was the one of three Nicholes dreams published on Slow Wave.

“I really got a kick out of it,” Nicholes said. “The art is really what makes it. The dreams themselves are usually weird or interesting enough, but if you just heard them described to you, they wouldn’t necessarily make much of an impression. Seeing them illustrated like that really seems to lend them some substance. It’s such a neat concept and he executes it very well.”

Heather Schell, an assistant professor at George Washington University in Washington D.C., sent Reklaw a dream entitled “Science Goes Awry,” where scientists splice together a vicious predatory animal and its weaker prey. “Most people hate listening to other people describe their dreams,” Schell said. “Jesse actually enjoys listening to people’s dreams. So sharing my best dreams with him is more satisfying than imposing those dreams on long-suffering friends.”

Regarding the website’s artistic style, Reklaw said that he drew upon Dark Horse Comics artist Jim Woodring and underground Canadian cartoonist Julie Doucet for a foundational basis for Slow Wave. “[They] made surrealistic and intensely personal comics that I found very inspiring,” he said.

Reklaw’s comics unique take on the unconscious plays works best when he teases the absurd and illogical themes dreams and morphs them into artistic coherency. One dream, entitled “President Stardust,” features a civil war between Americans who support a newly elected American President Ziggy Stardust and the fans of National Public Radio. The submission’s stand-alone description sounds like a potentially distracting cluster of creative tangents.

President Stardust - from a dream by Jenny Wolf. Taken from the archives at Slowwave.com.

Yet, through his artistic style, Reklaw takes a complicated concept and boils it down into its simplest form. He hides the NPR’s army using silhouettes but promotes brighter shades of green and red when highlighting the Bowie followers. He depicts the characters’ raw emotion through their actions and not complicated dialogue, adhering to the age-old narrative rule of showing plot development versus character monologues that explain important plot points.

In four panels he captures the heart of the two parties embroiled in the conflict – – namely, the over-the-top flamboyance of David Bowie’s contingent versus the subdued and often anonymous nature of public radio followers. And he doesn’t linger on too long on this theme, knowing plot-wise where and when to end his comic.

“I like dreams with narrative coherence, quirky humor, and fun things to draw,” Reklaw said. “Sometimes I email the dreamer with follow-up questions, trying to get more material. Sometimes that works, but usually not.”

Various weekly alternative newspapers, like the San Antonio Current and the San Diego Reader, publish Reklaw’s comic strips on a freelance basis. “I self-syndicate, which is how most alternative weekly cartoonists do it,” Reklaw said. “There are some alternative weeklies that go through syndicates though. A syndicate can take up to half your profits, so I’m not sure why that’s worth it.”

The IPRC: What are you making? from C. Lowry on Vimeo.

Slow Wave received critical acclaim as it grew into the home of nearly a thousand dream-based web comics. In 2002, On Magazine named it the “Best Online Cartoon.” In 2004, it won first prize at the Alternative Newsweekly Awards.

“I think I got picked up by 2-3 papers the year that I won. So that was a cool bonus too,” Reklaw said.

In 2008, Slow Wave received the “Outstanding Online Comic” award at the Small Press Expo. And in that same year, comic book powerhouse Dark Horse Comics published Reklaw’s strips in one volume entitled “The Night of Your Life” as part of a graphic novel series featuring prominent web-comics.

“Cartoonist Jesse Reklaw turns the dreams of strangers into the most insightful, humorous, and clever four-panel comic strips you have ever read,” said Amazon.com’s official review of the comic volume. “Each strip is an adaptation of the many dreams submitted to Reklaw from all over the world, every one a unique and compelling journey into a landscape to which we all travel but each explore alone.”

The review concludes, “‘The Night of Your Life’ is a testament to the ability of comics to illuminate the corridors of the imagination with wit, sincerity, and joy.”

“Reklaw is a terrific cartoonist and a does a great job condensing his daily adventures and musings into a logical and readable sequence of four panels,” said comic reviewer Richard Krauss of MidnightFiction.com. “The insights he shares about his personal challenges and daily routines provide enough material for a solid mini comic. But for me, the details about his book tour are where the story really shines.”

Despite this critical acclaim and his online following, Reklaw’s future is at a crossroads. Due to the recent financial downturn of print journalism, many publications are scaling back on their budget for weekly comic strips. Slow Wave recently became a casualty of the restructuring – – Reklaw lost his syndication deals with The New Haven Advocate, the Fairfield County Weekly and the East Bay Express after a 10-year relationship with all three papers.

“My comic also hasn’t been picked up by any new papers in over a year,” Reklaw said. “I haven’t had any say in those decisions. It’s strange to have been hearing that ‘print is dead’ for years, but to only be feeling it now.”

He added, “The hot thing now of course is the Internet. And I have been looking at it again as a way to supplement my comic strip income. But I think I’m not alone in being mystified as to how to make a living in such a rapidly changing medium.”