Recently, I watched a series on Netflix that inspired me to become a more active participant in my life. 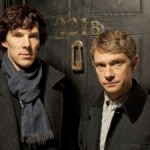 The boys of 221B Baker Street - - Benedict Cumberbatch (l.) as Holmes, Martin Freeman as Watson.

Originally airing on the BBC in Great Britain and PBS here in the United States, Sherlock follows everyone’s favorite British detective and the classic Sir Arthur Conan Doyle character as he solves the most difficult crimes facing Scotland Yard in the modern era. Gone are the horse and buggy, ascots and bowler hats. Instead, Sherlock, and his faithful companion Doctor John Watson, employ text messaging, camera phones and taxi rides while delving into their criminal investigations.

But it was one modern addition to the show that resonated with me most – – namely the web blog.

Watson, now a soldier/medic who returned home from Afghanistan with a service ending injury, is advised by his therapist to write a blog about what happens to him on a daily basis (the present day equivalent to penning Holmes’s case studies as it turns out).

It isn’t until Watson meets up with Holmes and they become flat-mates that he actually becomes re-invigorated and finds some meaning within his post-military career. Thus, he is inspired to write summations of each case they dive into (and eventually solve) on the blog.

This notion gave me pause. Why not do a similar thing (not solve cases mind you) but use this space to sort out what I am currently experiencing in my own life? Why use this blog as a place to find meaning in a sometimes meaningless world.

I have the webspace, the time and the training to do so. And perhaps it will be therapeutic. What’s holding me back?

Then I realized the answer: Nothing. Absolutely nothing at all.

So, this is my first attempt at starting something new, something that will give me the chance to express how I feel about issues and moments in life that present themselves before me. I invite you to join me as I delve into the inner sanctum of my psyche. (Wow, that’s deep, no?)

And thanks to Steven Moffat and the rest of the Sherlock crew for giving me this digital kick the arse.

UPDATE: I found the BBC’s faux Watson blog online. It seems that they ran updates during the show’s original airing and had some interactive games to coincide with each episode’s developments. Nice.