(As seen on the NY Times’ Local Blog, published on October 18, 2009. Photos by Nicholas C. Martinez) 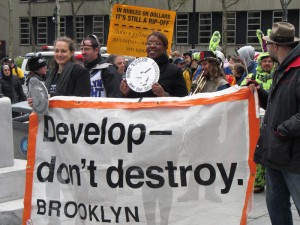 “Develop Brooklyn, don’t destroy it,” went the rallying cry of nearly 200 protesters who marched along the busy sidewalks of Atlantic Avenue and Pacific Street on Saturday. The demonstration, led by City Councilwoman Letitia James, was the climax of Develop Don’t Destroy Brooklyn’s fifth annual walk-a-thon against Atlantic Yards and its would-be developer, Forest City Ratner.

“They build a development that we do not want in our community,” Ms. James said. “What Ratner wants is to not only take away their homes, but to take away their memories. That’s why we have to march on.”

At 2 p.m., the masses gathered at Borough Hall with poster-board placards, metal cowbells and parachute-size banners in hand. After numerous pep-rally like speeches and the group’s picketing of the building (headquarters of Borough President Marty Markowitz, the project’s biggest champion), Ms. James and the organizers, along with a police escort and a seven-piece marching band, took the crowd on a walking tour of the Atlantic Yards site on the northern edge of Prospect Heights.

Along the way, she pointed out homes and businesses marked for seizure under the city’s exercise of eminent domain, which is being challenged in court.

The walk ended with an after-party at Habana Outpost on Fulton Street. According to Atlantic Yards Report, it raised $40,000 for the fight against the project. 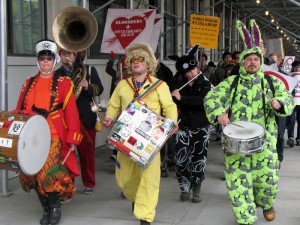 And the band (Environmental Encroachment, from Chicago) played on.

With the recent imminent sale of the New Jersey Nets to the Russian billionaire Mikhail D. Prokhorov, the race is on for Forest City to break ground before Dec. 31 — if the company misses the deadline, the project loses its tax-exempt bond status and a $400 million naming-rights deal with Barclays Bank for the arena.

But the protest, the project’s opponents said, revolved around something much more critical than Forest City and its bottom line.

“This is about working-class people,” Ms. James said as she marched across Atlantic and Flatbush Avenues. “This is about saving our homes and businesses against billionaires. We want our community back.”