The war for Cybertron has begun and the only weapon that can turn the tide is you. 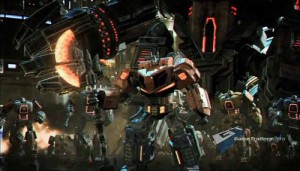 Transformers: War For Cybertron, now available on Xbox 360, Playstation 3 and the PC, throws you into the global conflict that precedes the famous 80’s cartoon series. Gamers can play as their favorite Transformers characters, either Autobot and Decepticon, in order to turn the tide of the war – – and determine the ultimate fate of the robot homeworld.

Activision, the lead distributor of the game, takes their first shot at the producing and what they accomplish with the franchise is much more than meets the eye. War for Cybertron brings Transformers into the 21st century by mixing thoroughly engaging story lines, superb combat and vehicle systems based on the Unreal engine and an easily adaptable multiplayer construct that will yield hours upon hours of consumer enjoyment.

The end result is a satisfying shooter that has an identity all its own, appealing to die-hard Transformers fans and newcomers alike.

The 3rd person gameplay found in Transformers: WFC also mimics the Gears of War franchise sans the notable cover system. But, one doesn’t miss the feature at all, for the ability to covert your character into vehicle mode (the hallmark of the Transformers line) more than makes up for the omission.

Depending on your choice of hero or villain determines what vehicle your avatar transforms into: fan favorite and Autobot leader Optimus Prime, brought to life by the legendary voice actor Peter Cullen, rolls around as a futuristic 18-wheeler cab while the treacherous Decepticon Starscream buzzes over head in the form of an alien-looking supersonic jet.

Followers of the previous failed gaming franchise will notice WFC’s stark contrast from its predecessors. Gone are the clunky and cumbersome controls of the past, where players had to hold triggers down to keep their Transformer concealed in vehicle mode. Now, players have a similar control system to comparable third person shooters: they fire with their right trigger, scope aim with their left and transform into vehicle mode by toggling the left analog stick. There are times, though, where you find yourself accidentally transforming or using your melee attack (press the right stick button) in the midst of a heated battle. Thankfully, High Moon added a much appreciated button mapping in the main menu options on the start screen.

Also gone are previous attempt’s pathetic graphical design models. In past games, Transformer characters were improperly scaled with the NPC’s and buildings around them, taking gamers out of the moment long enough to mock the poorly designed surroundings.

WFC, however, rips pages out of the graphical design handbook of Gears of War and Halo 3 by making level backgrounds as engaging at the game itself. Cybertron, seen only in multiple 2-D animation cells and brief CGI snippets in Dreamworks’ recent theatrical release, receives a complete 3-D graphical overhaul – – a process which breathes life and vigor into non-explorable surrounding areas.

For example, while advancing through the war-ravaged Autobot capital of lacon, it’s hard not to stop and stare at the vivid violet hue of Cybertron’s sun reflecting upon varying shaped and sized silver towers and spires. And the streaking scarlet energy blasts of the mid-air battles mixed with the smoldering metallic shards of city ruins beyond the level boundaries makes Cybertron the game’s most empathic character.

While the single player campaign is linear but nevertheless enthralling, the game’s multiplayer mode is completely open-ended and malleable. It totes 8 multiplayer maps made to encompass 6 different gameplay modes, like fan favorites Team Deathmatch and Conquest.

Take a look at this multiplayer demo to see all of the intense online action:

Players begin with four different classes of characters, each with its own unique Autobot and Decepticon chassis to fabricate and color: scientist, soldier, scout and leader. Each type also yields with its own set of abilities (scientists can heal other players on the battlefield while soldiers can take more damage thanks to their extended life bar), equipable weapons and killstreak rewards for use in the different game modes.

In the video below, the developers of the game describe the class system of WFC in greater detail:

The character experience system is reminiscent of most online shooters: the more points you get in a session, the more experience points you’re rewarded. After gaining enough experience, players level up, unlock new abilities and weapons and eventually create upwards to 12 playable robots (3 for each category) – – which expands the replay value of the game immensely.

There’s also a twist to the scoring system: point bonuses are added to your running total for completing special in-game achievements, like staying alive for set amounts of time, getting long distance head shots with sniper rifles and reeking twisted metal havoc with your melee sword, axe or war hammer. This helps players level up and gain unlockable abilities much more quickly, as well as adds another level of satisfaction and enjoyment to the overall experience.

Simply, War for Cybertron is the unequivocal and definitive Transformers game, one loyal fans have been waiting for since the introduction of next generation gaming, succeeding where many other game producers completely and utterly failed.