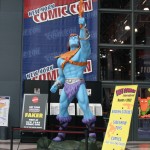 Mattel's Faker Statue guarded to the entrance to this year's NY Comic Con, held at the Jacob Javitz Center in Manhattan.

Call it a United Nations of pop culture or a comic fan’s Shangri-La. Either way, when NY Comic Con rolls into the Jacob Javits Center, one thing is for certain – – those in attendance let their geek flags fly.

Men and women dawn the iconic red, blue and yellow known to the Last Son of Krypton, Superman. Jedi Knights and Sith Lords engage in intense light-saber battles for bragging rights and not for galactic domination. And the true heroes of the day – – the men and women who created these and many other timeless characters – – sign autographs and take pictures with the star-struck visiting public.

“The fans are so dedicated,” said actor Aaron Douglas of the Sci-Fi Channel’s “Battlestar Galactica.” “They just need an outlet. So you get a great event like Comic-Con to finally give them a venue to show their appreciation. I love coming to these things.”

In the past, NY Comic Con and other similarly structured conventions solely served as a place to pick up cool swag and hang out with fellow comic book lovers. Now, it acts as a gateway into the multi-billion dollar world of multimedia entertainment, a world where video game and movie producers await the convention goers with open arms.

In 2008, comic book properties not only jumped into mainstream, but also earned Hollywood producers a financial windfall. Warner Brothers’ “The Dark Knight” raked in over $1 billion worldwide at the box office, making it the highest grossing comic book movie of all time. Marvel’s “Iron Man” and “The Incredible Hulk,” also released that year, netted $582 million and $263 million respectively, according to BoxOfficeMojo.com.

Visitors to the show meandered through a maze of glass display cases filled with action figures and cloth-covered folding tables covered in t-shirts, hats and DVDs marked with recession friendly price tags. They collided with the wall of sounds produced by the numerous video game demonstrations – – futuristic machine guns fired energy bolts and bullets at a rapid pace, pro wrestlers pounded and slammed each other inside a virtual ring and computer generated vehicles raced around an asphalt track over blaring techno music as players shifted in and out of gear on game controllers.

The show’s “Artist’s Alley,” just a few steps away of the vendors and demos, mixed famous artists like Jim Lee and Rob Liefield and emerging independent talents in a sidewalk café-like atmosphere. Their goal – – to draw everything and anything the visiting public conjured up.

“I see this place, especially when you go down to Artists Alley, as an incubator for ideas,” Tanguay said. “And that’s the great thing about comics. It’s a personal expression on somebody’s part, but sometimes it just catches on and becomes a cultural phenomenon.”

The Manhattan-based convention also welcomed movie directors, like “Watchmen” director Zak Snyder, to debut never-before seen footage to packed auditoriums. They hosted press junkets and Q&A panels for below the exhibition floor for television shows like Fox’s “Fringe” and invited unsigned artists to workshop one-on-one with talent evaluators from both Marvel and DC Comics. 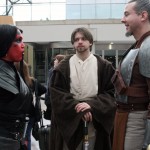 Peace in the Galaxy: Jedi and Sith put aside their millenia-long conflict and enjoyed the sights and sounds Comic Con had to offer. Photo by Nicholas C. Martinez.

Dr. Robin S. Rosenberg, author of the book “The Psychology of Superheroes: An Unauthorized Exploration,” said that comic book movies and conventions act as a release valve for the stresses of the real world.

“In our post-9/11 world, I think that people in many countries, not just the U.S., felt more vulnerable,” she said. “People yearned for heroes, to be inspired by them and to know that they could be rescued by them. And like any good fiction, superhero stories provided escape.”

Rosenberg said that NY Comic Con, which attracted a record breaking 77,000 visitors this year, is more than just an oversized shopping mall for comics and games.

“There’s something special about being with thousands of like-minded people,” Rosenberg said. “When people with an interest in comic books attend the preview screenings, go to the talks, check out the items for sale in the exhibition area – – they walk in the door and instantly feel part of a community.”

Jeremy Hibnick, a comic book fan and exhibitor from California, said he recalled a time when society frowned upon attending comic book conventions. “I remember when it felt kind of counter culture,” he said. “Now, it’s taken over all the different kinds of media. I think it’s really exciting, especially for those of us who grew up loving comic books.”